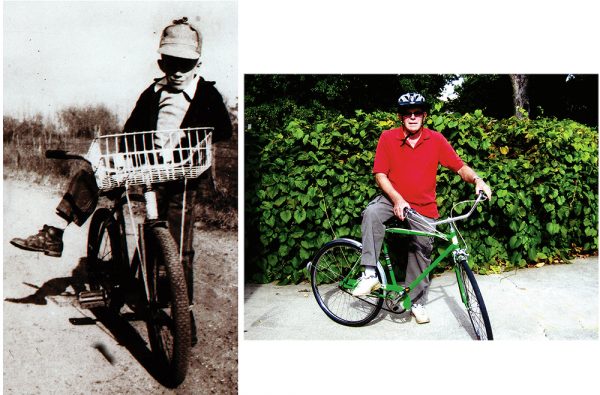 Photo Left: Gary on his first bike, circa 1947, a JCPenny Bicycle.

Growing up on the family dairy farm near the Sac River in Missouri, Gary had few freedoms afforded him outside the prying eyes of his doting family. “I was at a great disadvantage,” Gary said, “I had five sisters always on my case, like mothers.” What he needed was to navigate the course of the unknown, a boy’s natural sense of exploratory freedom.

That freedom came in the form of a J.C. Penney bicycle bought by his father at a nearby farm sale. It wasn’t the prettiest sight. “I recall it had no back fender,” Gary said, “and I rode it on gravel and mud roads so if you rode it on a rainy day, you’d have a mud stripe down your back.” The tires weren’t in the best of shape either. And the tough terrain of unpaved country roads didn’t help. Not an easy fix in the shadow of WWII with materials like rubber in short supply. “Those tires took a lot of patching,” he said.

But in whatever condition that used bicycle was in, it afforded Gary the freedom he had sought after. “It sure beat riding a horse,” he said, “that took a lot of effort with the saddle and everything. With the bike, you could just jump on and you were gone.” Gone from the cautious eyes of his sisters and family and into uncharted areas previously deemed off limits. “They didn’t want me walking down to the river because I might fall in,” Gary said, “or near the cattle because something might happen.” But with the bike, it was different. “You were gone before the girls knew where you were.”

“I think it was a neat little bike for a country boy,” his wife Lea said,

“I don’t think a lot of people had bikes back then.”

After years of faithful service, the bike lost favor when his father bought a small tractor in 1950 and, at the age of ten, Gary learned to drive. The thrill of the tractor was replaced later by the arrival of a used Jeep and so it went—machine to machine, automated modes of travel in favor of the once beloved single speed. It was the only bicycle Gary ever owned. Until two weeks ago.

Recently he’d been reminiscing about his old bike and set out on a quest to find it. Well, not the same bike, but maybe something like it. The bicycle of his youth had been destroyed quite sometime ago. Shortly after his mother died, his father sold the farm and the bike ended up buried in a limestone cave along with the rest of the scrap metal.

A few weeks ago near his current home in Independence, Missouri, Gary found himself at a Bicycle Shop who happened to be hosting a bike show and swap meet. He asked around and eventually came across what he was looking for—a J.C. Penney brand bike. It wasn’t the same exact model but was the same brand. “It’s a very European style,” he said, “with thin rails and very tall thin tires.” Nonetheless, it is now his.

And he’s been riding again, for the first time since his youth. “It’s great fun,” he says about his rides around the neighborhood. Although, at his age, the issue of escaping the watchful eyes of his family has returned, bringing him full circle. “I’d like to try these trails they have here but my wife likes me to stay in the neighborhood,” he said.