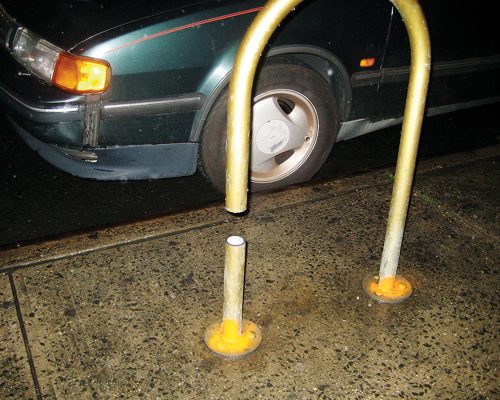 On his website, Arizona-based lawyer Erik Ryberg has posted a favorite joke, “Q: What did the meth-head get for Christmas? A: My bike.” Ryberg, “Tucson’s Bicycle Lawyer,” specializes in cases involving cyclists and is in tune with the city’s vast bicycle scene. “Theft is on everyone’s mind all the time,” Ryberg says.

For many years Tucson was one of the worst cities for bicycle theft in the U.S. in a ranking by Kryptonite locks. That said, recent statistics show that the city is improving. According to data from the Tucson Police Department, reports of bicycle theft have been steadily decreasing, and year-end reports indicate that nearly 1,200 bikes are stolen each year in Tucson.

“You can’t ride off on a f*cking stereo.”

Still, having one’s ride stolen is of major concern in a city home to a thriving bicycle community. What becomes of the stolen bicycles is a mystery, but many agree that flipping them into cash for drugs is often the motivation.

“Scutter” (a self-appointed street name) is a bicycle thief. Fond of meth and short of funds, he finds himself stealing whatever he can to fuel his habit. Bikes are often the score. “Everybody’s got bikes,” Scutter notes. “You can’t throw a rock here and not find a bike.”

In addition to being plentiful in supply, stealing a bicycle also provides the means for a quick escape. “Bikes are like, well, you can’t ride off on a f*cking stereo,” says Scutter.

In regard to his selection process, Scutter admits that the right lock does play a role. When confronted with several potential grabs, weaker locks are the easier targets. “If there’s a little stupid lock, you’re gonna take that one first, cause it’s an easy free one,” Scutter explains.

As for the more advanced locking systems, they may take longer to crack but they are not as impenetrable as was once assumed. Reports surfaced as early as 1992 describing how certain u-locks could be opened with the aid of a ballpoint pen. And a demonstration at a recent Defcon hacker conference showed how to pick a lock using a fake key made out of a credit card. Despite the type of lock used or whatever additional precautions an owner might take, Scutter claims that if a thief wants a bicycle, they will find a way to get it.

His one piece of advice? Put it in a tree. “If you really don’t want it stolen,” Scutter says, “put it in a tree. On those sidewalk trees, just don’t lock it next to it, put that f*cker up in the tree.” This method is one he claims makes the bicycle not worth the trouble. “You don’t know what to do then. You don’t know how it’s chained up there or if it’s gonna fall on you. The last thing you want is to have a f*cking bike fall on you.”

Perhaps for the more than 1200+ owners who reported their bicycle stolen in Tucson last year, that’s what they would want to have happen?