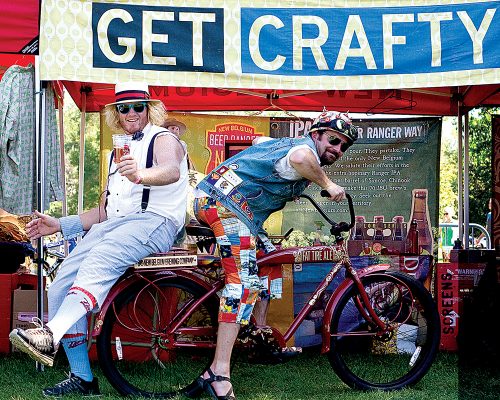 Tossing bottles onto a conveyor belt and carrying kegs into bars 15 years ago in Fort Collins, CO, Michael Craft couldn’t have imagined that today he’d be at the nexus of where beer meets bikes.

His previous role as Senator of Tour de Fat Non-Profit Relations, (he’s now in Asheville, NC and works as the Community Ambassador). To everyone he comes into contact with, he’s affectionately known as “Crafty.” For years his role was overseeing the FUNdraising campaigns for these festivals. This certainly was not a one-man show by any means. The event requires a team of dedicated and hardworking folks to bring it to fruition.

Part music festival, part bike parade and part circus-side show, the TDF has become one of New Belgium’s flagship touring events. Besides the promotional aspect of the event, it’s also the outward incarnation of NBB’s philanthropic mission. This is where Crafty comes in. “I work with the beneficiaries of the TDF, and help them raise money.” Crafty has masterfully connected with individuals and groups across the country and acted as their “go to” guy – not just for logistical support -but he’s also there to assist non-profits to connect with their local communities.

For those who haven’t experienced these events first hand, the Tour de Fat is a thrilling rite of passage that includes a costumed bicycle parade, tons of NBB beer, a variety of eccentric entertainment, local food, unusual bike contests and more.

This event helps raise money for local non-profits through beer and merchandise purchases; and NBB/TDF recently exceeded the $2 million mark for total funds raised since its inception 20 years ago.

At the core of the Tour de Fat was the ceremonious car-for-bike swap. In each of the cities this tour stops in, one individual becomes the center of the show as they hand over their car keys, and pledge to live one year car-free. Each car-for-bike swapper then chooses a local bike shop and $2,250 is turned into the ultimate car-replacement commuter bike. Vehicles are then auctioned off and proceeds benefit local cycling organizations.

We recently caught up with Michael Craft to find out help explain exactly what this whole Tour De Fat thing was all about.

BIKE CITY: What do you do for New Belgium?

MICHAEL CRAFT: For 10+ years I worked on the Tour De Fat. My official title was “Senator of Tour De Fat Non-Profit Relations,” or just “The Senator.” In this role I helped bicycle specific non-profits raise money from this event. Essentially I become the communications officer for NPOs, help them organize volunteers and raise money.

BC: Which came first: fundraiser or music festival?

MC: The history of it all really came down to having a Sturgis for Bikes, we wanted to celebrate the bike and it really developed as a bike party of sorts. Twenty years ago, no one  would have thought that having a bicycle on the label would be the icon that it’s become today. It’s the flagship of TDF. The bike.

BC: How much money has NBB helped raise with TDF for non-profits in 20+ years of hosting TDF?

MC: We recently surpassed the $2 million mark. And this is in addition to the $1 per barrel that NBB distributes each year to other advocacy groups around the country that may not be fortunate enough to have a TDF.

BC: Was this a dream job?

MC: I started at NBB in 2002. I was basically throwing bottles onto the production line. Then I was a keg delivery guy and a few years later, I was hired on to be part of the logistical team for TDF. I always thought it was such a cool concept: celebrating beer and hosting a bike party. After a few years doing that, I proposed a job to NBB, because I really saw the need to have a more focused effort supporting the NPOs and by doing so we could help them raise more money. And it was accepted!

BC: Did you ever imagine that you were gonna be living the rock-n-roll lifestyle, touring around the US?

MC: It’s not as wild as it used to be, but there definitely have been mornings that it felt like it. We all go out; there’s been a bunch of late night bike rights through cities. We have a blast.

BC: Why does NBB host the TDF?

MC: We’re not in this to pat ourselves on the back for hosting this event. Ultimately, it’s about building community and joining forces with local communities to promote cycling. Sure there’s an inherent marketing value for NBB, but it isn’t what gets us out of bed in the morning.

BC: How do non-profits raise money at TDF?

MC: NBB beer is the catalyst to make money for the NPOs at the show. That being said, this is a bike festival with beer, not the other way around. It’s certainly not designed to get people on bikes and drink. Beer and bikes have always gone together; they are the two greatest inventions of man: beer and bikes.

BC: What is your favorite memory on tour with TDF?

MC: We used to do a lot of pranks on the tour, and I was always getting hit with them. One time in Austin, I’d unpacked and neatly organized my clothes and stuff in the hotel room and the crew was always making fun of me for it. So they thought it would be funny to replace all of my clothes in the hotel with kid’s clothes. I didn’t realize it until the day of the show. I opened the first drawer, and said “huh?” By the time I got to the third drawer, I was mad as hell, and then I heard Chris Winn and Brian Bogan laughing hysterically in the other room… and I knew I’d been had.

BC: What is the slap fight game?

MC: This is a game that went on for days and days. It usually started up when we were out, after we’d had a bunch of beers. The rule was that you couldn’t slap the person that slapped you. So it went round and round. It’s a fond memory.

BC: Why didn’t you return to Seattle or Portland with the TDF?

MC: We felt like these cities were already about the bike and they didn’t necessarily need us to throw a bike party for them any longer – they had the culture and the infrastructure to do it themselves. We really started focusing on emerging bike culture cities, so we replaced them with Durham, NC and Nashville, TN. We continue to see these newbie festivals doubling in size year-to-year. We added Atlanta, GA and Washington DC this year; I’m really excited about the DC show.

BC: Isn’t this festival just another booze cruise?

MC: This may sound strange from a guy who’s worked at a brewery for 10-plus years, but this festival is really more about the bike than the beer. It’s Tour de Fat, not Tour de Frat. It’s a celebration about bikes and beer. It certainly is not a booze cruise. We aren’t out there promoting boozing and biking. This is our effort to bring together communities of cyclists to celebrate the bike, and lend support to the advocacy groups in each community we host the TDF.

BC: Besides the music and beer, what else is an attendee in for at TDF?

MC: There’s also a super creative aspect to the festival and we work hard to make this festival a teachable moment about sustainability, about bikes, about fun; and we strive to create “ah-ha moments” in a variety of ways. We definitely aren’t anti-car, but we are pro-bike. The whole ‘righteousness’ of some biking communities, I think it turns more people off than it turns people on.

BC: You give people the opportunity to trade a car at TDF?

MC: We’ve been doing this for five years, and we haven’t missed a city since it’s inception. The car trader program inspires people to reconsider their lives without a car, and in exchange we give them $2,250 to go to a local shop and buy a super custom commuter bike. It’s been wildly successful.

BC: What does Tony Danza and the Tour de Fat have to do with each other?

MC: Everything and nothing at the same time. It was based on the Elton John song “Hold Me Closer Tiny Dancer.” We butchered up the lyrics and came up with the Tony Danza idea. It was the carnies idea, as a way to give the attendees a group hug. It’s gonna be hard to beat that one, it was mind blowing. http://tinyurl.com/9spgwe9

BC: What kind of bike do you ride?

MC: My bike of bikes is a Black Sheep, it’s one bike to rule them all. I have all sorts of different tires for it, so I can commute on it, and ride it as a 29’er mountain bike. I have 13 bikes, and this is the one I use every day. When we are tour with the TDF, we try to ride bikes everywhere we go in our host cities.

BC: What is your first bike memory?

MC: I don’t remember what brand it was, but it was a red BMX bike, and I thought the pads were totally stupid, so I took them all off and the morning of my holy communion, and I was riding the bike with my friends, I was doing all sorts of jumps and landed on my two front teeth, I chipped them off pretty bad. I’ll never forget coming home, my mom was on the phone with my aunt Betty and her saying: “oh my god Michael Brian Craft!” As a kid, I always knew I was in deep sh*t when my mom said my full name.

MC: I was coming back from a show in Missouri and I had chiggers all over my body in places that I don’t even want to remember again – it was awful.

BC: How does NBB want to be seen by the world?

MC: We want people to see NBB as a supporter of communities and to be the model for how companies can pave the way for caring about the environment, raising money for NPOs and being there for those that support us. It’s not just about making money and world-class beers, but doing it thoughtfully and sustainably. It’s at the core of what we do and why we do it.

BC: How many of NBB employee bikes do you have?

MC: I have them all. I had a streak of winning years, and won a bunch of employee raffles when there were extra bikes left over.

For more info about NBB and Tour De Fat: newbelgium.com/tdf