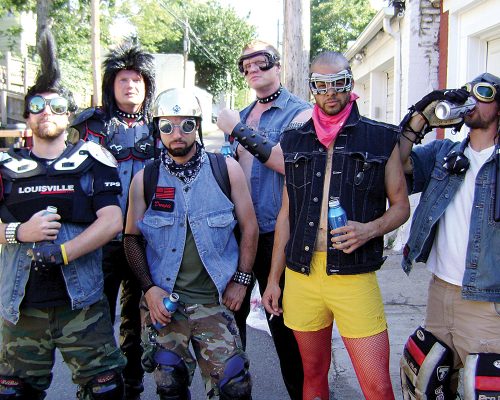 When you think of a “bike club,” the images that may flash into your mind might be of a crew of skin tight spandex clad, iron man wannabes. Or you may even go to the opposite end of the spectrum in thinking it’s a Hell’s Angels type of club. The Cobra’s resemble neither of these extremes. They may appear as armored and wigged riders who could be extras from a Mad Max movie, however, in reality, it’s a leisure bicycle club, and that’s the part we take seriously. Leisure.

Any bicycle aficionado can get their friends together and ride around. However, forming a bicycle club requires more than that. To start, you will need a kick ass name. Once you have your covert cover, the next step is a mission and this club’s mission is to spread revelry.

It all really started out as a joke. A group of us were hanging out batting around about the idea – It started with Cap Hill Cruisers, and from there it morphed into a full-fledged brainstorming session and there’s little doubt that booze and smoke were part of the fuel that perpetuated the idea. After we’d come up with the name, one of our founding members, Andrew Nutini (aka Droopy) designed the logo, and from that we created the embroidered patches – which includes an image of a fierce looking cobra with a wall of fire looming over a skyline. Inducted members wear this badge of honor on their badass jean vests, and with nicknames given to each member: Sparrow, Hefe, Captain Dirty and The OC, et al., along with this, the club came into existence. We had already been riding around together, but when the Cobra’s rolled in en masse, that’s when the club became real. By “real,” this was the first time we all wore our jackets, and rode to the Cobra Den (clubhouse) together.

Even though this club started out as a spoof, it has become out of control entertainment. No one told us we should start a bicycle club, it just happened. It was truly born for the fun and love of riding bicycles. The bicycles are only one part of the concept of a bicycle club, the social aspect that has developed as a result, makes the Cobras that much more special. This is a key component about being in the Cobras: you know the people around you are ok with you being you!

By taking the club to the next level we even went all out and had a website and made and have custom t-shirts and memorabilia as well as links to the Cobra social media pages. We even have a sponsor bar for our rides. A club does that, not some random group of friends.

To some, the idea of leisure bicycle club may seem ridiculous, but in reality, it’s just good old fashioned fun. There may be a night where we take a cold weather night ride to see Christmas lights, or on another night we may find ourselves as part of a roller derby half-time show; wearing body armor and crashing into each other, or you may even find us riding in the Denver Cruiser Ride’s “Circle-Of-Death” on a Wednesday night in the summer. Some of these things may not  be your cup of tea, but the reason to start a club is to cruise around on bicycles and be with friends.

Should you join a bicycle club, or start one yourself? Ask yourself if having fun, making new friends, and creating memories inspires you; if it does, go for it!

Do you have a bicycle club we should know about? email us BikeCityMag@gmail.com