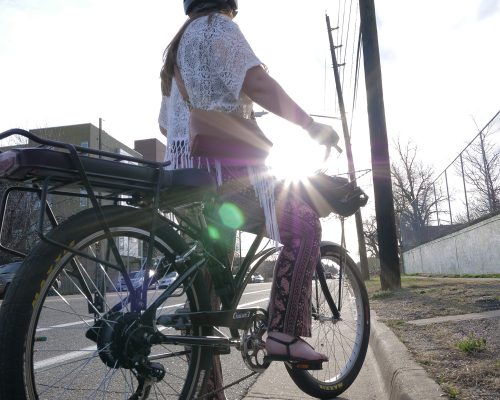 Electric bikes are becoming more common in the United States, and most people are aware of them, and many have even tried one out. Globally, electric bikes have become a common and popular transportation option, but they are only becoming popular here in the US.

One frequent comment I hear when discussing electric bikes is “isn’t that cheating”. My usual response is to ask “Cheating at what? I look at a bicycle as transportation. Sure I enjoy riding my bike for recreation as well. But I get plenty of time for recreation while riding to work, or the grocery, or the restaurant in addition to the rides I take solely for fun. With an electric boost available I often find myself choosing to take the long way home from work, or cutting through the park, or climbing the steepest alley in Denver just to see from the top.

And for those that look at a bike as an exercise tool, I can see how a motor initially seems like a cheat. But how often do you get on your bike to exercise? And how much exercise do you get driving to work, the store, the restaurant, the gym? On an e-bike you get exercise on every trip you take, and you’ll find yourself taking it on most trips once you get past looking at it as just a tool for exercise.

And when you do want to ride exclusively for exercise, just turning the motor off and remove the battery. Without the battery it amounts to carrying an extra 10-20lbs on your bike when you do use it just for some exercise a couple times a week. All the better for expending a little extra energy on your workout. And then ride it with the motor on for a moderate work out the rest of the time. You’ll find yourself using it instead of your car on most of your around the neighborhood trips.

A 2016 study done at the University of Colorado Boulder and published in the European Journal of Applied Physiology concluded that “Pedelecs (pedal assisted electric bikes) are an effective form of active transportation that can improve some cardiometabolic risk factors within only 4 weeks”. There are some people who choose to ride electric bicycles without pedaling at all but that’s their choice. If you choose an electric bike that is,, at it’s core a good, practical bicycle for your riding needs, then you’ll most likely find yourself pedaling along without even thinking about it. Unfortunately many first time ebike purchasers overlook this and end up with an ebike that looks cool but is hard to pedal when the motor is off. If the ebike has a good seat height so your legs aren’t too bent, isn’t overly heavy, has decent components, and relatively low rolling resistance then you’ll be set.

Another common question that is asked is “how far will it go”. Or “how fast will it go”. Sometimes even asked by the same people who think an ebike is “cheating”, which is total BS. It’ll go until you quit pedaling isn’t the answer they’re looking for, but it’s tied closely to the truth. The range of an electric bike depends on many factors, but one very important factor is how much will you be pedaling. A motor/battery on an efficient, good quality bike with a rider who is also providing the equivalent of a few hundred extra watts of power will go much further than the same motor/battery on a heavy, inefficient fat bike with a rider who is not providing much additional pedal power.

One other important factor determining how much range you will get out of an electric bike is speed. Or more accurately, power. And to go fast uses much more power than going slow. Just like an unassisted bicycle, it is much harder to pedal fast than it is to pedal slow due to wind resistance and the bicycle’s gearing advantage trade off of torque vs speed. Also getting up to speed accelerating from a stop uses more power, so a slow application of throttle will noticably increase your range. Other variables affecting the power required to move the bike include riding conditions like, hills and headwind. Just like when you are pedaling, hills and headwind take more power to ride than flat ground on a calm day.

And finally, the range of an ebike will depend on the battery and the motor it is equipped with. An electric bicycle battery pack is measured in it’s rated Voltage and Amp Hours (or together they will tell you Watt Hours). The bigger battery pack in Watt hours will have more stored energy. And more stored energy will result in more range. And a higher power motor, while getting you where you are going quicker, will use up your batteries stored energy quicker. So a higher power motor, if you use the extra power that is available (you will), will have a shorter range.

Because there are so many different variables that affect an electric bicycle’s range that it’s very common for manufacturers to overstate a real world range that a typical rider could expect under normal usage conditions.

Eric Guetterman is an electric bicycle guru, and is the founder of EFORCE bikes,  https://www.eforcebikes.com