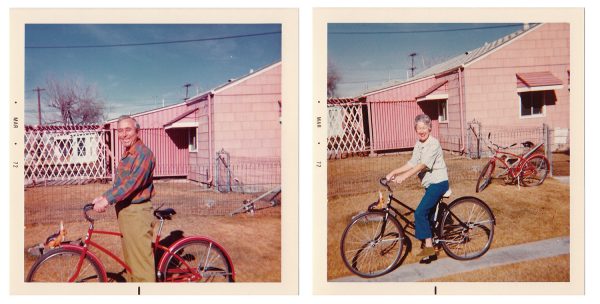 John Decio met his wife Nellie in 1946 while on shore leave in Boston. He was a chief petty officer in the Navy and she had recently relocated from her home in Halifax, Nova Scotia to become an American citizen.

Introduced by a fellow acquaintance, they shared an immediate attraction and were married three months later. He continued to serve in the Navy where he had enlisted in 1942 shortly after the attacks on Pearl Harbor.

After the war ended he served on transport ships taking care of refugees being sent to the United States. Following 11 years of service at sea, he left the Navy and he and his wife settled into a home in Southwest Denver. He worked as a dispatcher for Rio Grande Motor Freight Trucking while she took part time jobs in various area shops and looked after neighborhood children.

Bicycling was something Nellie always had enjoyed and she was able to get John into as well. Nearly every weekend, they would spend their days on long leisurely rides to places like Morrison taking in the Colorado landscape. Nellie passed away a few years ago and John’s cycling days are long behind him but he has fond memories of the times they spent together cruising about town. “Oh yes,” John said, “she really liked that.”