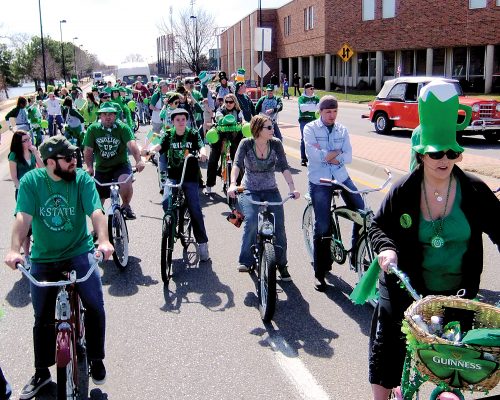 There is no doubt that Kansas is a hotbed for classic bikes. On any given day, the Wichita Craigslist bike section reads like a collector’s fantasy: consistent listings of Hawthornes, Shelbys, Schwinns, Western Flyers, Spaceliners and more. So it’s no surprise that one of the nation’s most active and open classic and vintage bicycle clubs is based there.

The Coasters Bicycle Club of Wichita, Kansas has no membership dues or requirements to join. Show up a few times and you’re in. Clearly, this makes estimating membership numbers a challenge, but the Coasters don’t care. They just want to have fun, united in a common love of all things bicycle.

“Just like any hobby it gives you the opportunity to hang out with likeminded people,” Randy Van Scyoc explained. “But anyone – people from artists to teachers and lawyers – anyone can work on and ride a bike. I love that diversity … that all the different people come together. The bicycle is the ‘great uniter.’”

And united they are. There are about 25 “hardcore regular” Coasters that attend every club event, but it’s estimated the club casts a wide net of about 200 members overall, ranging in age from young kids who just learned to ride all the way up to Van Scyoc’s 77-year-old father. It doesn’t matter whether you prefer cruisers, vintage bikes or rat rods … ride a bike, pitch in, hang out, you’re a Coaster.

“Yeah, we’re a loose-knit group, but it seems to work well for us the way we do things,” explained Van Scyoc.

The Coasters refer to their website their “virtual clubhouse,” and use community consensus to pitch ideas and determine if the group will participate. New events are announced on the website. In addition to weekly pub crawls, social rides and parade details, the core group also works together in the community, doing things like displaying their bikes at auto shows and Boy Scout awards banquets, adding two-wheeled flavor to a historical society event, or helping to assemble bikes for a charitable giveaway. They’ve also had a team presence at the American Diabetes Association Tour de Cure and done some road-tripping to other states to attend the popular Tour de Fat.

As with many great ideas, the club was hatched over a few beers. A Thursday-night pub ride amongst four friends started to grow, and an opportunity to name the group came about when Coaster member Erick Riedell was filling out paperwork for the group to ride in a local parade.

“We needed a name other than just ‘a few dorks on bikes,’” he said. “I thought ‘Coasters Bicycle Club sounds pretty damn cool’ so that’s how it got started.”

The club has grown to now host several annual events to showcase the bicycle and bike culture, including curating a show called Art of the Bicycle, which celebrates vintage and custom bicycles as art forms. For seven years running, they’ve also hosted the popular Midwest Bicycle Fest, attracting bicycle enthusiasts from several states. And this year’s second Midwest Bicycle Swap promises to be bigger than ever.

For more information on the Coasters Bicycle Club and upcoming events, go to locojoe.com/coasters/

Know about bicycle clubs we should know about? Email us bikecitymag@gmail.com